About Us
|
Gallery
|
Why Choose Us
|
Testimonials
|
Contact Us

Fey Funeral Home has been family-owned and operated for over 70 years. Local family ownership means a more caring service and more involvement in fulfilling your accommodative needs and desires. We are committed to tradition. We respect both the wishes of the deceased and the bereaved and therefore address every concern as individually as possible.

You paying your final respects to the deceased is just as important as us offering support to family and friends left behind. We will be there by your side in this difficult situation, to console you and give you the space you need to go through the process of grieving. We never lose sight of our role as an understanding companion to you during your time of mourning. You can turn to us for personal guidance. We will listen. To us this isn't just a job, it's a calling.

Honoring with Respect and Sincerity

Original building prior to addition, completed in April of 1952.

1937 After learning to be an embalmer at the age of 16, Paul Fey Jr. later became an instructor at Hohenschu-Carpenter College of Mortuary Science in St. Louis, Missouri. Paul took over ownership of Rolland Acres Mortuary located at 4345 Washington Avenue in Saint Louis City. He managed and operated the funeral home until 1945.

1945 Paul Fey and Grace Schwob married and moved to the township of Mehlville, MO where Paul developed Fey Ambulance Service and operated the business until 1975. Being a founder member of the Mehlville Lions Club, he also served as board chairman of the Mehlville Fire Protection District for over a decade.

1987 An addition to the funeral home was built which included a large family gathering area and a second funeral parlor.

1989 Paul passed away leaving his wife of 50 years, Grace, to be owner and president. Their daughter, Deanna Fey Stark and her husband David Stark Sr., became funeral directors and managers. Paul Fey Jr. owned and managed the funeral home for nearly 40 years.

2000 Forever Yours Memorial, Inc. was formed as a pre-arrangement service to better serve families before the time of need or loss and help lessen the burden of loved ones.

2008 - Present David Sr. passed away, leaving wife Deanna and their two sons, David Jr. and Dennis Stark, to continue as managers and directors. Now with the fourth generation, Rebecca Shockley, licensed as both director and embalmer, Fey Funeral Home, Inc. continues being one of the few family owned and operated funeral homes in the St. Louis area. 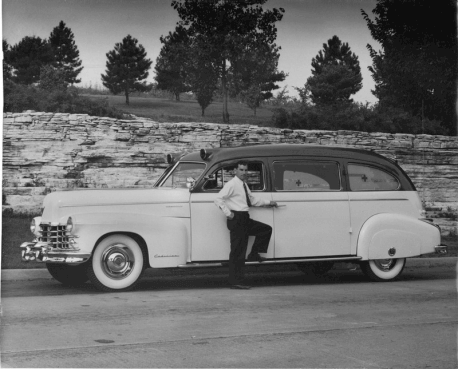 About Us
Gallery
Why Choose Us
Testimonials
Contact Us

We stand ready to assist you. If a death has occurred, please call us on the number below: